We decided to visit the north-east in early 2019. That summer, the ‘tin province’ was the safest place in Tasmania.  The rest of state seemed to be threatened by fires.  Nic had a few things to show us.  Near Gladstone, Ian and I followed him along some old roads towards the Ringarooma River.  We passed old workings, overgrown water races and rusting metal.  Then we turned onto a rough track that took us downhill through a pleasant woodland.

There were more signs of activity; a long pipe and a tree half strangled by a massive wire rope.  Abandoned lumps of iron became frequent.  Then we saw a tall brown wall looming over the trees. It had to be the remains of the Dorset Dredge.

We’d heard stories of a floating mining machine that was supposed to be the size of a battleship.  What we found was certainly big and intimidating.

We walked around the sandy shore of a lagoon taking in the huge rusting vessel. It lay on its side.  One side held the remains of machinery, the other was its flat bottom.  The once active and noisy dredge rested silently.

At the front of the wreck was a line of metal scoops.  This continuous chain of buckets had once chewed millions of tonnes of tin rich sediment to feed its ravenous internal machinery.  Now the bucket ladder and its hoisting crane extended onto the shore.  It looked like the arm of some iron dinasour that had fallen in the lagoon and had made one last grasp for solid land before it expired.

We were all impressed.  Ian even tooks some pictures. That rarely happens.

Earlier that day we had stopped near South Mount Cameron about 20 kilometres south of Gladstone.  In the bush was another part the dredge – a large iron barge, or pontoon. It is surrounded by scrub and a few pieces of discarded machinery.  The Dorset Dredge once worked nearby but it had shed its skin to move to Gladstone.

The dredge and its discarded pontoon were fascinating.  But what was their history?

The many lives of the Dorset Dredge

For a machine that moved so slowly, the Dorset Dredge had covered a lot of ground. Both when it was satisfying its appetite and when it moved from one prospect to another.

Redbank Dredging Company – The Dorset Dredge began at Redbank in central Victoria.  Known as the Redbank Dredge, it recovered gold, without great success, between March 1939 and March 1941.

It was a bucket dredge powered by electric motors.  Floating in its own moving pond it dug down 10 metres.  It had the capacity to consume a million cubic metres of earth a year.1

The Dorset Flats – The Second World War gave the failed Redbank gold dredge another life. The war needed tin for bronze and mechanical bearings. But the major tin mines had been cut off.2  The Australian Government turned to the tin fields of north-eastern Tasmania.

The north-east contained tin deposits buried in ancient riverbeds.  A prime location for the dredge was the Dorset Flats on the Ringarooma River, about 3 ½ kilometre north of Pioneer.

The government bought the Redbank dredge in November 1942.3  Its machinery was removed and shipped to Tasmania.  A new pontoon was made at South Mount Cameron and launched in February 1944.4  Buildings for staff, workshops and an electricity supply were built beside the Gladstone road.

The completed dredge weighed 900 tons.5  It looked like a floating multi-story shack. It sounded worse. It was said that it ‘shrieks, groans, wails and screams as if its soul were being dragged from its galvanised iron body.’6 It started working in October 1944.7

Before the dredge could start work the course of the Ringarooma River was changed.  The branches that wandered across the swampy flats were closed off to force the river into its easternly channel.8

A gang of men cleared the vegetation in front of the dredge. Trees and bushes would foul the machinery.  Stumps and logs buried in the ground were hauled out by the dredge’s overhead cranes and winches.9

The dredge was moored by wire ropes attached to winches that allowed it to move across its digging space and consume a semi-circle of ground about 120 metres wide before inching forward and repeating the process. 10  Each year the dredge ‘noisily digests a slab of swamp land ‘of about 13 hectares.11

There is only a minute proportion of tin, about 70 grams per cubic metre. The machinery in the dredge separated the tin and poured the rest out behind it.  It left a barren flat waste of sand and rock.  Finer material washed away into the river leaving its mark as dirty water and silt.

The dredge cut up and down the Dorset Flats in 120 wide stripes.

The Dorset Flats were mined out by July 1959.  The dredge had recovered over 2,000 tonnes of tin concentrate, and about 171 kg of gold from 19 million cubic metres of ground.12

Dorset Extended – In 1959, the dredge moved to the far western edge of the flats.  It was only 1.6 kilometres away but it took a lot of work to get there.

A channel was cut through a ridge and the dredge was raised 10 metres to enter it. The dredge was towed through the channel and then dredged its way 700 metres to the Dorset Extended.  Dredging started in August 1959.

In June 1960 Storeys Creek Tin Mining Company bought the dredge.13  The Dorset Extended area was worked out by May 1963.  It produced 432 tons of tin concentrate.

This was not the end for the Dorset Dredge.  A new field was found and it would be reborn a third time.

There were two challenges.  Gladstone was 22 kilometres from the Dorset Flats and the tin leads were deeper.  The solution was for the Dorset Dredge to leave behind its second pontoon for a bigger one to be built near Gladstone. The machinery was stripped off the dredge, refurbished, upgraded and taken to the new pontoon.

By April 1964, the dredge was working in the New Dorset area.15 It first mined the biggest, McGregor and then the Aberfoyle area. In August 1968 it moved upstream to Black Duck area.  But it was not a success.16  Work stopped in March 1971.17

By 1978 the dredge was moored in a small lagoon near Black Duck Lagoon waiting for another life.

A number of plans came and went. 18 Eventually the dredge was being stripped of its machinery. It became unbalanced by the uneven salvage and turned over during floods.  This left the relic we see now. 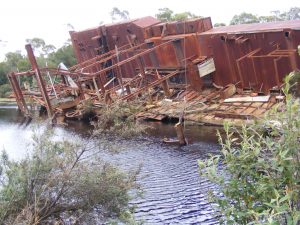 Reflections on the Dorset Dredge

The wreck of the Dorset dredge was big and startling.  It stands out in its landscape.  But it has a much bigger legacy.  The mark it made on the landscape is much bigger but harder to see.

The Dorset dredge turned over tens of millions of cubic metres of ground.  The short term effect on the landscape was devasting. It left barren plains and poured sediment into the river.  Aerial photographs taken when the dredge was working clearly show the impact on the Dorest Flats and the New Dorset area.  The dredge also added to effect on the river of the other historcial tin mining.

Sand tailings from mining lifted the bed of the river and broadened it out.19  The sand blocked side streams producing lakes up to 2 km up the tributaries.

However, nature is resilent. Vegetation has grown back on the highly altered Dorset Flats disguising the marks on the landscape.   Sand tailings are being slowly flushed from the Ringarooma River and it is expected to make a full recovery in time.20  Take a look at the imposing Dorset dredge before it is claimed by rust.  Remember to look at the shapes it left in the landscape to understand more about what this now silent monument achieved.