This search happened years ago but it is never too late to talk about an interesting but forgotten piece of history.  Without knowing it, Nic started the search for the Fossey flume when he sent two pictures to Ian. He was hooked straight-away.  They were sections of a flume, part of the extensive water system for the Mount Bischoff mines at Waratah.

They looked pretty interesting, but seeing them would be better.  In the forest, these solid structures would have stood high above the creeks and gullies they spanned.  They would have looked like wooden bridges. But there would have been no noise of carts or horses, just the drip of water seeping from the timber joints.

Nic has recounted the history of the Fossey water race.  What interested Ian was the remains.  Perhaps there would be a flume still standing somewhere.  For that we had to find the race.  We knew that it ran from the Fossey River near Mount Pearse to the Falls River reservoir. The intake on the river was just 2.7 metres higher than the outlet. An incredibly low gradient of just 0.02%. As Ian said ‘so close to flat that it doesn’t matter’.1

Where did the water race run?  We couldn’t find any old maps showing its route. We were more confused by it being said to be seven kilometres long despite the Fossey River passing within a few kilometres of the Falls Creek reservoir.  We just had to start in the bush and try to work it out from there.

We first started with the smallest clue and a lot of hope. A map showed a small circular pond on the northern edge of the Fossey River.  It could have been the offtake for the water race.  Ian and I found a small natural depression. We followed the river for a few kilometres downstream into a swamp.

We looked where it may have run into the Falls Creek reservoir.  All we found was thick scrub.

Then we heard that Cemetery Road crossed the water race near Falls Creek reservoir.  The day started well when we found it on both sides of the road.

We followed the race towards the Fossey River. It was overgrown but it was deep and well formed.  It reached a small creek crossing. Our first chance to find a flume.  There were just a few rotting beams in the creek bed.  The race on either side of the creek was built up with rocks where it would have once joined a section of flume.  The rockwork was covered in moss but it was still as solid as the day it was built.

Not much of an outcome but we did now know the elevation of the race.  Since it was almost level, it must have contoured across the country side at the same height.  We looked closer to the Fossey River but there wasn’t a trace. We tried a different tack, go to the source at Mount Pearse.

There were some good-sized streams rising on the western side of the mountain. It was a natural place to collect the water.  Again, we found nothing.

Ian hadn’t finished with the western side of Mount Pearse.  He wanted to check a large pile of earth that we’d passed on the last trip.  Turns out it was the water race.  And what a race. It was at least 3 metres deep.  It was on the edge of a gully, poised to cross a significant creek.

We tried to imagine where the elevated flume would have gone.  We looked for the big timbers from the flume, but there was nothing.  On the opposite side of the gully, about 30 metres away, we found the rocky mouth of the channel. Nearby was a small quarry where the rocks had been dug. The race turned and contoured along the edge of the gully.

The race ended again in another stone lined section high above a creek. The flume that spanned the gully would have been 30 metres long and at least 10 metres high.  A great sight in its day but now there was nothing but the stump of one pier.

There had been no remnants of flume at two significant crossings so far but we were now moving from gum forest into remote, unburnt, rainforest.  Maybe a section of flume had been spared.  The race continued for about kilometre, well formed, broad and deep. In some places it still held water. It contoured around Mount Pearse and towards the Fossey River.  Then a creek crossing. It wasn’t big.  Again, a disappointment but there were the last rotting remains of small supports made up of logs stacked on other logs. Anything significant was long gone.

We gave up on finding any of the spectacular sections of flume.  That afternoon Ian headed back to the Fossey River to where we had made the very first search.  This time he would go to  the southern bank to try to trace the race back to the intake on the Fossey River.

Ian takes up the story of the afternoon of the third trip.

Looking across the river and up the bank it would seem something was going on, we crossed and headed up. ‘Bingo’ I said, ‘here is the trench again’ and what a trench it was. It was probably three metres deep.

This search was starting to mess with my head. The scheme came from the Fossey yet we were a few meters above it. Following the well-defined race east was quite difficult.

We got close enough to hear the river at times.  The channel took a distinct curve and headed south from here. A short while later I heard noisy water. Was this a weir?  No, it was the river was starting to gain some altitude. But it did indicate that the river was coming up to meet us on the race. Would this ultimately be where the race and the river came together? Well nearly.

The trench we had been faithfully pursuing all day came very close to the river, once again pulled away and abruptly ended in an embankment under a road. The road also bridged the river. By this time, we were on the eastern side of Mt Pearse and the sounds of vehicles travelling the Murchison Highway seemed close by.  The original intake had been buried or destroyed by a forestry road. My vision of maybe a dam and control gate or, even better, a brick intake building was shattered.

On our return we decided to take a short cut and eliminate the large curve in the route. In the failing light and thick scrub, I barely managed to find the race, and then lost it several times. We would have walked past where we had to exit if I hadn’t made a small rock cairn as a reminder.  In the failing light at the end of the day in the forest, it was a relief to find the cairn.

Ian still did not have his standing flume.  The Fossey flume festered in our minds for a year.

We mapped the race by putting in the parts we knew and guessed the rest. But it would be longer than the reported seven kilometres.  We figured that this could be solved if we changed our guess in the Little Pearsefield area.  Instead of contouring around a significant gully it may have went directly across it on an imposing flume.

We parked on Pearsefield Road less than 10 metres from the race.  It did what we hoped, headed straight at the creek.  We located where it ended on the northern and southern side of the creek. A flume should be in between.

The forest in the creek was open so we had a good chance of finding something.  But there wasn’t the towering outline of a flume in the dark of the forest.  It had fallen years ago and rotted where it dropped.  Two pairs of tall piers lay on the banks of the creek. The creek held the litter of the  decayed flume.  It was our best result but 120 years of decay had robbed as of the sight of a standing flume. Our imaginations would have to produce that vision. 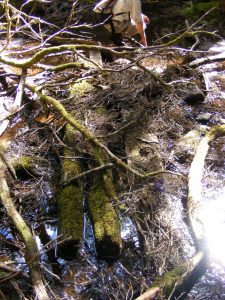 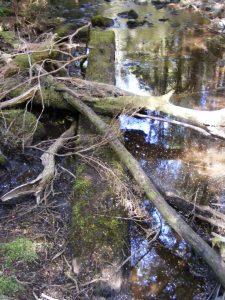 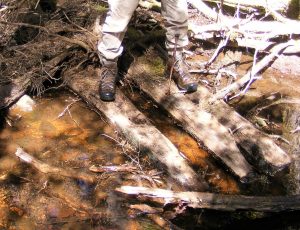 We left knowing that we had given the search for the Fossey flumes a good shake. Our curiosity has been satisfied and we never returned. What else was there to find?

Since we made these visits the country is being used for forestry operations and access may not be possible.  We do notice though, from aerial photographs, that some of the alignment of the race has been protected.  It is great to see that this small piece of history is being recognised.

2 thoughts on “The search for the Fossey flume – part 2”