In the period 1915–22 a veteran Field stockrider William Bonney (1857–1935)1 was the resident stockman at Old Gads Hill Station.2 Molly Pedley, née Field, recalled a trip to his hut. With typical bush hospitality, Bonney boiled the billy—but shocked his visitors by stirring the tea with his false teeth.3

While that story suggests the habits of a crusty old bachelor, Bonney was actually married with ten children, the last being born at Launceston in 1915. Perhaps his wife Alice Bennett and the kids hadn’t yet joined him at the time of Pedley’s visit, but the family certainly lived there together later. 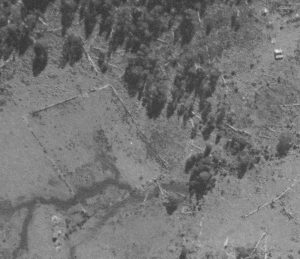 And why not? They were well set up, with two stables, hayshed, chaff house, slaughter house and, presumably, a skin shed.4 The house had a huge stone fireplace with stone hobs, allowing some of the six resident children—Arthur, Albert, Lindsay, Millie, Dolly and Lena—to sit virtually inside the fireplace. In addition, there was accommodation for at least six visiting stockmen, and the arrival of riders (typically Arthur Collins, Dick, Frank and Humphrey Brown) with a mob of cattle was a signal for the convening of a bush party. With Mark Shaw (1875–1963) wresting a tune from a squeezebox, Bill Bonney and his son Albert practised the step dance.6

At this time, the Shaw family lived on an adjacent 82-acre Crown purchase, enabling Mark Shaw to farm on his own account as well as assist Bonney with mustering duties.  Shaw had a stockriding pedigree, being the son of former longstanding Gads Hill overseer Thomas Shaw, one of seven brothers formerly in Fields’ employ. He recalled that the art of mustering Fields’ wild cattle was to come upon them by surprise when they were grazing, then head them off before they could escape into the mountain fastnesses:

There were always a couple of recognised leaders among the bulls in any mob and as soon as they sighted the drovers they’d gallop for shelter, with the rest of the mob following. The drovers had no hope of pulling them up, so the idea was to keep them galloping in circles—‘ringing them’, they called it—till they tired and settled down.

Even when the mob had quietened, a bull might break away, necessitating the introduction of the bull-mastiff cattle dogs which were ‘specially trained to hold wild bulls’:

They’d run with the bull, worrying it, until it lowered its head to gore. Then the dog would grab the bull by the nose and hold on till the bull stopped. Then the drovers would bring the rest of the mob along and surround the runaway bull. When it was surrounded and jammed in by dozens of other cattle the dog would let go. And even that did not always work. I remember one bull we had to yoke to the bullock team to bring him along.7

When the cattle were driven down from Gads Hill to Mole Creek, residents took evasive action:

As soon as they saw us coming, mothers would grab their children and take them inside. It was the sensible thing to do. I remember once when we were passing through Mole Creek just after the railway had been built and the train arrived in. The mob just wheeled around and stampeded about three miles [five km] back to Sassafras Creek before we could pull them up.8

Twenty-one-year-old labourer Mark Shaw had married eighteen-year-old domestic servant Bertha Millicent Bramich at Sunnyside, Railton, on 7 December 1896.9 The first child, Evelyn, was born when Mark was stockriding for Fields at Borrodaile (Big) Plain, where the couple lived in a three-room house (Bertha spent her confinement with her mother at Railton).10 After that Mark Shaw built the three-bedroom timber house on Gads Hill. Eventually there were eleven Shaw children, six boys and five girls, making in all thirteen people to accommodate.

Ethel Shaw (born 1908) vividly recalled growing up on Gads Hill. It was a dairy farm, with milk, cream and butter being produced for family consumption.11 Water was drawn from a well sunk on a spring. Supplies were hauled in by bullock team and dray from Deloraine—but on at least one occasion an Indian hawker also came calling. Bertha washed the family’s clothes at a washtub by the creek, boiling the clothes in kerosene tins over a fire.12 While Mark and Bertha had a kapok mattress, the kids slept on ‘ticks’ (improvised mattresses), which were chaff bags stuffed with cut grass. School was four kilometres away—downhill and uphill—through rain, hail, snow and shine.13

Bill Bonney and Mark Shaw both snared through the winter and, in fact, whenever they could get away with it, regardless of season. Shaw recalled seeing many thylacines (Tasmanian tigers) and even snaring a couple.14 On one occasion police raided the Shaw house looking for out-of-season skins. The Shaws were warned on the ‘bush telegraph’, and when the constable came knocking Bertha invited him into the living room where two kerosene cases served as chairs. ‘Come in, sit down.’ ‘Have you got any skins?’, asked the constable—who of course was sitting on a stash of dry possum skins concealed in the kerosene case. ‘No’, came the reply. There was a skin shed on the farm where Bertha skun the game, pegged out skins and even tanned some, and a search of the bedrooms would have revealed bedding of possum skins rugs, but with no fresh skins to be found the constable departed emptyhanded.  Bertha’s skills with native furs were an essential part of family survival. She lined one possum-skin rug with red flannel and sold it to a Deloraine bank manager for £40, half a year’s wage for some people.15

Legendary hunter and highland guide Paddy Hartnett and his wife Lucy Hartnett operated a store at the base of Gads Hill until mid-1916. Paddy was a frequent visitor to the Shaw household at this time. Crushed by recent events involving the outbreak of World War One, it was evident by 1915 that Hartnett was descending into alcoholism.16 However, his reputation as a bushman was unblemished. On a frosty night in May 1918, when four-year-old Thelma Shaw wandered off from the farm barefoot, Hartnett’s availability to conduct a search revived her father’s hope of finding her alive:

‘”Don’t worry, Mark”, he used to say, “we’ll find her all right”. And somehow I believed him. She was found on the morning of the fourth day by Ted Bullock and Ted Clarke, and apart from a few bruises and cuts, there wasn’t much wrong with her … We found out afterwards that the poor little thing often saw the lanterns of the men searching in the dark, but she ran away from them because she thought they were spooks’.17

Ethel Shaw reckoned that her mother worked so hard that she simply wore out. Bertha Shaw collapsed while planting carrots in the vegetable garden of the Gads Hill house in 1926, aged only 48.18 She died with a rake in her hand, working until her very last breath.19

Eighteen-year-old Ethel, the oldest girl still at home, became her father’s housekeeper until she went into paid work, being replaced by her younger sister. Past 50 by this time, Mark Shaw had given up stockriding, deriving an income from snaring and raising fat cattle. Occasionally he guided a hiking party into the pre-Overland Track Pelion Plain region, which he would have known from his droving and snaring adventures. After Christmas 1929, for example, Shaw met Launceston bushwalkers Fred Smithies, Cecil (CK) Stackhouse and Alf Weymouth with two saddle horses and a pack horse for the two-day journey via Borradaile Plain and the Mole Creek Track to Pelion Huts. After spending two nights with the party, Shaw trudged out of Pelion Huts in pouring rain—carrying the saddles and other gear that his impatient horses had left behind when they started for home without him.20

When exactly the Shaw farm was abandoned is unknown, but Old Gads Hill Station ceased to be a residential site in the 1920s, after more than 80 years. The last known occupants were brothers Dick (18??–19??) and Frank Brown (1862–1923), along with Frank’s partner Louisa Brown.  All three had previously lived and worked at Fields’ Middlesex Station.21 Frank Brown died of heart failure and pneumonia while setting snares on Bare Hill in 1923, his body being discovered by Dick Brown and Mark Shaw.22 The stories of how Fields shifted to ‘New Station’ Gads Hill and of the Brown family stockmen will be told in future blogs.

1 thought on “Old Station, Gads Hill no.3: The Bonneys and the Shaws”