The Pelion Plains are wonderful place to visit in good weather.  Following the Arm River Track, the old Mole Creek Track, the crown of Mount Pelion East is your first glimpse of the majestic and distinctive mountains that surround these remote plains.  At Lake Ayr you get an oblique look at Mount Oakleigh.  A few kilometres further on, as you leave the thin forest, you start to glimpse the rest of the mountains.  However, it is a few hundred metres later just after you cross Douglas Creek that the bold face of Mount Pelion West stops you in your tracks. It is the backdrop to the open plains and to your right Mount Oakleigh reveals its long rocky columns.  Mount Ossa and all its friends are to the left.

The Pelion Plains also have a very long human history. There are many reminders of past but they are slowly fading. It seems that some remain to be discovered before they are gone forever.

November 2017 was the 100th birthday party for Old Pelion Hut. The Tasmanian Parks & Wildlife Service put on a celebration which included bushwalkers, members of the Mountain Huts Preservation Society, the press and a visit by someone looking a lot like Bert Nichols.1 It was a great reason to visit the Pelion Plains.  Ian Hayes, Eddie Firth and I stayed for a while to do some sleuthing.  And made some interesting finds that we’ll tell you about another time.  On the way out we decided to check out an old stockyard near Lake Ayr.

The stockyard is slowly disappearing.  The deadwood race that leads to it still endures but you really have look for it even though the Arm River Track runs through it.  Simon Cubit has written about the history of the fence and stockyard;

In 1926 they (John Cox and Charles Day) built a stockyard on a grassy knob near what is now called Stockyard Creek. It was a substantial structure to which they added a deadwood race over five hundred metres long that ran from the stockyard to Lake Ayr. Once the cattle were on the move, the theory was that they would run along the fence and be forced into the yard. Put to the test, the plan was only partially successful.2

The stockyard was harder than ever to find.  It took the bloodhounds, Ian and Eddie, to find its collapsed remains.  We spent a little time there looking at the way that the stockyard was made, how trees had been felled, the arrangement of the yard and how the slip rails were put into the posts.  The scene is nothing like a photo of Simon’s from 1987 when most of the structure was standing. Almost everything has fallen and covered by bush.3 There was something else that I wanted to look at nearby.

Many years ago I had found some stumps a little way south of the old stockyards. I never really worked out what why they were there.  It was time to make some sense of them.

We found the stumps about 150 metres south of the stockyards. They were near a sheltered forest along an unnamed stream.  They looked like gum trees and they had been felled by an axe many years ago. The fallen trees were no were to be seen, they had been moved or burnt. The stumps were very weathered and probably not too many years from disappearing.  There were even more, and much bigger stumps, in the forest where grander trees had grown. 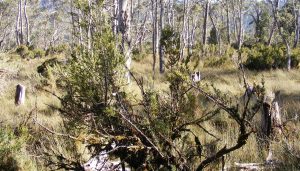 Some of the Stump (Photo P Brown 2017)Why were they felled?  This area is full of history so working out their purpose was a challenge.  The survey for the 1891 Mole Creek and Zeehan Railway passed through here.  But the stumps were an isolated group, not a line. And they would not have survived the 130 years.

The stumps were old as shown by being axe cut and very decayed, a lot like those at the stockyards.  Were they for it?  But there was plenty of timber at the yards themselves.

The final clue was just in the edge of the forest. It was a small level clearing with an almost invisible but distinct square depression.  This looked just like a hut site.  It was about 5 by 5 metres as measured by the indentations in the ground. These were either where the bed logs for the walls had sat, the drip line from the hut’s roof or a drainage ditch to keep water from the hut.  There was even a small worn rut along one edge that was probably where people had funnelled through a long disappeared doorway.  For a hut it was an ideal position; shelter, water and timber.

The mystery of the stumps was solved but another one emerged to take its place.  The stumps were from building a small hut.  But whose hut?  There was not a single part of the structure left (but huts do often burn down).  There hasn’t been any mention of a hut in this area and we didn’t see any artefacts to help identify who used it and why.

Could it have been a hunter’s camp? It certainly hadn’t been used for drying skins because that would have needed a lot more stumps for the timber needed to fuel the drying fire.

The best guess that we can make is based on it being the nearest well sheltered location to the stockyard.  And the stumps being about the same age as the stockyard stumps. It was probably a camp for Charles Day and John Cox while they were building the stockyard.  Later it might have been their mustering camp.  If it was it lasted less than six years because Old Pelion Hut was used for the 1932 and later musters.4  We just can’t be sure because there is no written or oral history that puts a hut in this place.  It doesn’t even make the authoritative list of huts in the Mersey and Forth area made by Basil Steers.5

Do you know something that will solve the mystery?  The one thing we really do know is that there is much more history in this remote place than anyone can guess and it can pop up at anytime. Just keep your eyes open for the possibilities.