In April 1842 a new settler named Frederick Wilbraham Ford, his future father-in-law Thomas King and four convict servants drove 75 cattle overland from Longford to King’s new property at Table Cape.1 This was an adventure. There were unbridged rivers to ford, including the smooth-stoned Mersey, along the Van Diemen’s Land Company (VDL Co) Track through the highlands. The track was also poorly graded and barely formed. Luckily the Mersey River was low on this occasion, but 2.5-hour ascent of Gads Hill was unnervingly steep. ‘The herding cattle kept herding back’, Ford wrote. ‘As they came back we had to shout, halloo, scream; rattling our sticks into their head, ears, noses, forcing them on …’

On top of the hill they met two men who were to build a hut ‘for a gentleman who had hired a vast tract of land as a cattle run’. The men warned Ford about the Mersey-Forth divide: ‘You may get hemmed in between the rivers for weeks without provisions—one or two have been starved to death here—the gentleman in question met the same adventure—so to avoid mistakes in future he has got a hut put up’.2

The ‘gentleman in question’ was William Field junior. The Field brothers—William (1816–90), Thomas (1817–81) John (1821–1900) and Charles (1826–57)—were extending their late father’s pastoral estate to the western side of the Mersey River. The Gads Hill Hut was built to house a stockman, not as a safety net, although any stranger would be welcomed in that isolated place.3 As well as being a high country cattle run, Gads Hill Station became a holding paddock for Field cattle being driven to or from stations further afield—their private leases at the Middlesex Plains, the Hampshire and Surrey Hills to the west; and Crown leases at the Borradaile Plains and Howells Plains to the south. It was the fulcrum of a grazing empire that, according to Thomas Field, once extended to the west coast.

Like their father, William Field senior (1774–1837), the Field brothers had a voracious appetite for pasture, and ruled by intimidation. They dominated their impoverished landlord, the VDL Co, increasing their power over that company as its fortunes declined. Divesting the Fields of VDL Co land once they were established on it was difficult, since few other graziers wanted such large, isolated holdings, and anyone who did take on the VDL Co holdings would first have to tackle Fields’ far-flung wild cattle. The Fields knew that legitimately occupying VDL Co and Crown land allowed them to illegitimately occupy all the adjoining open plains of the north-western highlands gratis.4 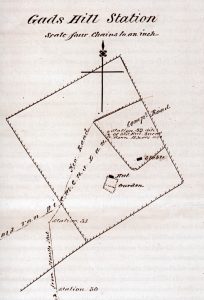 The 1862 survey, showing the position of the stable

the horse paddock and the main paddock, as well as the track to Howells Plains.

The VDL Co had built a stockyard at Gads Hill—Emu Plains, as they called it—as a staging post for its highland stock drives.5 This was the blueprint for Fields’ Gads Hill Station, where William Field leased 2000 acres of Crown land.6 An 1862 survey of Gads Hill Station detailed a post-and-rail fenced paddock arranged on the intersection of the VDL Co Track and the track to Howells Plains. Inside the holding paddock were a hut and garden, plus a stable built inside a fenced inner (horse) paddock. The stable was built for the original 1842 stockman’s hut, which burnt down c1848. 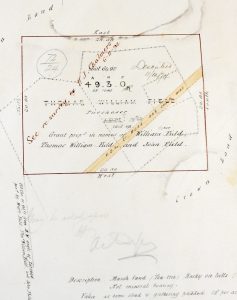 49-acre purchase on Gads Hill, 1873, depicts another fenced paddock to the

West as well as the horse paddock. 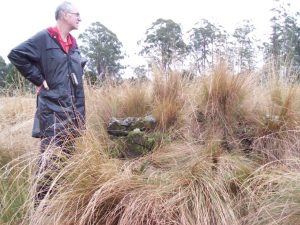 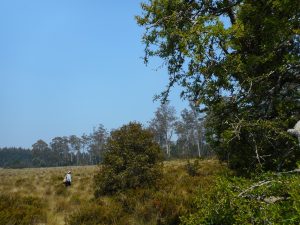 In 1873 surveyor Percy Sorell described the Old Station block as ‘marsh land’, and it seems an odd place to build a hut. Today there is no sign of the original hut site, but the outline of the stable, the later (c1848) hut and the fence lines are just discernible. There are few surface artefacts, with even the remnant stone chimney butts being overgrown.